SALE! SAVE 35% at CHECKOUT WITH CODE Thankful21

ACCOUNT LOGIN
View the cart
No products in the cart.
$0.00 Cart

Why We Write Letters to Each Other Everyday

“The single biggest problem with communication is the illusion that it has taken place.”*

Krista and I start each morning by writing a letter to each other.

*Eye roll.* I can hear some of you gagging a little behind your computer screens.

But, hear me out. Communication is one of the top challenges for both business teams and for marriages. So, why would it be any different for a husband and wife business team?

In our experience it can be even tougher communicating when working with a spouse. It’s easy to assume how the other person might be feeling. You feel like you know your spouse so well that you can commit to things without discussion. So much time is spent together that it feels like communication has taken place all day.

And sometimes it’s just difficult to navigate home and work boundaries. Because the truth about work-life balance is that it doesn’t really exist. It’s helpful to think about the concept of balance so we’re fully present in the places we should be at the times we should be. This is especially true when working with a spouse. While we may occasionally work in separate rooms, we still spend the vast majority of our time together.

Why We Started Writing Notes

It wasn’t because we felt moved to profess our love for each other. It actually started with an argument. One of those that spans over a couple days. We were discussing the direction of the business and had differing ideas of the next steps we should be taking and to what tasks we should be devoting time.

As with many of our arguments, Krista believed I was getting ahead of myself (I probably was) and not focusing on more practical tasks that were right in front of me. Meanwhile, I was angry with Krista for not even trying to understand why we should start doing certain things that might not have an immediate return-on-investment.

We had reached a sort of stalemate. It was one of those with no fights with no resolution, but an unspoken agreement to cease-fire and move on. That’s fine, sometimes—until it comes up again.

So one morning I decided I was going to write a note to Krista about it. It wasn’t long, but it allowed me to say what I wanted to say. Krista wrote one back in the same journal. And all of a sudden we had a productive conversation.

Sometimes the challenge of verbal communication are the treasonous glimpses of nonverbal communication—a subtle eye-roll or hands crossed over your chest in a defensive position. Writing a letter cut through all of that extra language that occasionally gets in the way.

The Benefits of Writing Letters

We started writing letters because it was a practical way to express ourselves to each other. But since then we’ve noticed a number of benefits that makes letter writing such a powerful activity.

1. Letters tend to force us to be more thoughtful and articulate about what we want to say. I can’t write as much as I can say in 5 minutes, so I choose my words more carefully. And it’s often easier to see flaws in your own logic when you start writing something down.

Quick note here: It is possible to say something stupid in a letter. I know because I’ve done it. But I find it’s much less likely to happen 🙂

2. Letters provide both of us time and space to process and reflect. Ever react to something and immediately regret it? Yeah, us too.

Letter writing gives the writer space to explain his ideas or feelings without receiving any premature verbal or nonverbal response. And whomever receives the letter has time to process what was said and formulate their own response.

A little bit of space makes a huge difference.

3. Letters make it easier to understand each other’s perspective. It’s no surprise that having the time and space to process each other’s thoughts and feelings has made us a little more empathetic.

Krista has a personality type (ISTJ) that processes new ideas through asking questions. I tend to take her questions as attacks on my ideas when she asks me out loud. But when we’re writing to each other, I’m more likely to take them for what they are—questions. And likewise, Krista has more time to ponder about my ideas before launching into a barrage of questions.

It turns out that just being with someone for 22-hours out of the day doesn’t give you complete insight into their feelings and well-being. Writing daily letters to each other has given us the opportunity to connect with each other in a meaningful way on a daily basis.

5. Letter writing has helped us deal with anxiety. I struggle with anxiety on a daily basis, and I’ve been known to worry about some silly things. When I write that kind of stuff down, it’s easier for me to realize how ridiculous a lot of it is. And for the more serious things, it’s a way to process. 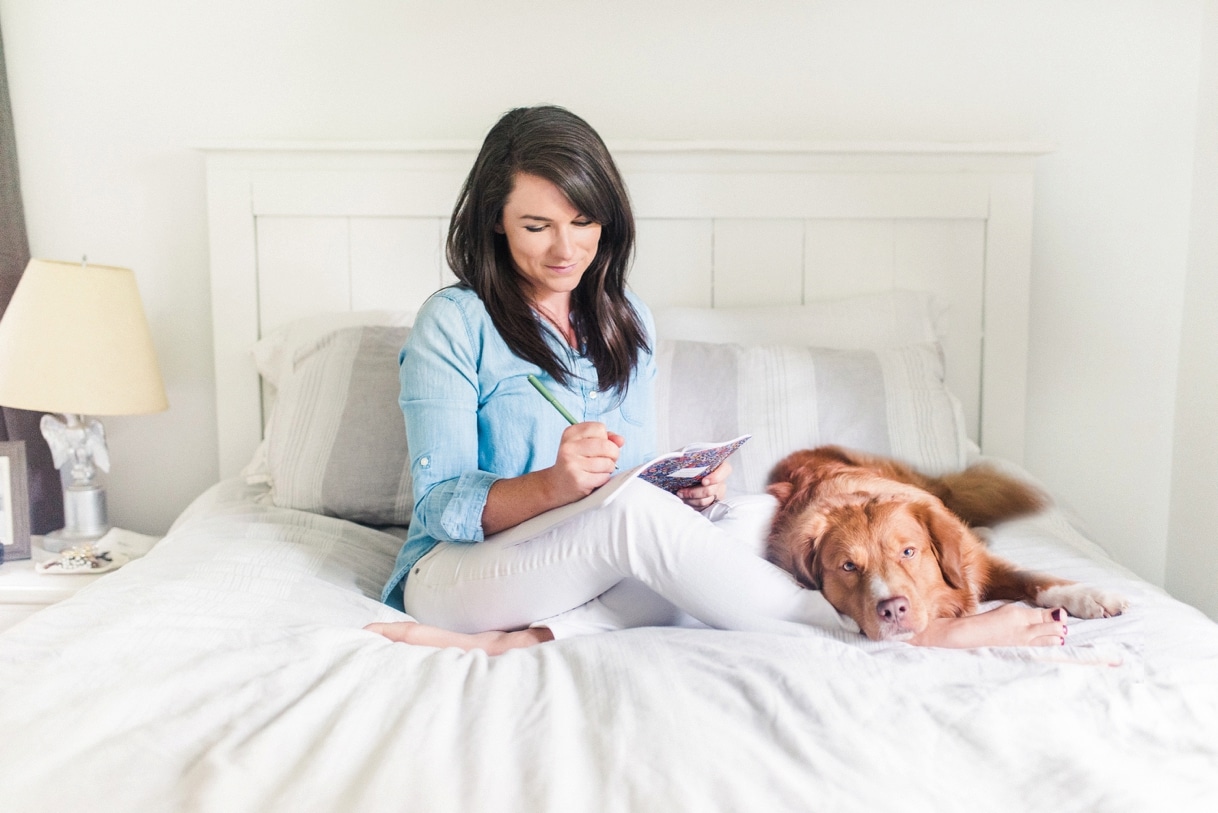 How We Do It—And Some Ground Rules

It’s not on our daily to-do list, so there’s no pressure to ‘check-the-box.’ We enjoy doing it, it doesn’t take a ton of time, and the impact has been significant. Some letters are short, and others are longer. Some are sweet, some are funny, and some are more serious.

We use the same journal to write letters to each other. It keeps everything in the same place, and it’s easy to trade after one of us has written. One morning I’ll write the first letter and the next morning Krista will write the first letter. Sometimes we’ll each write more than one letter if something’s going on that warrants it. But most of the time we each only write one letter.

We don’t trouble the process with a lot of rules. We just let the letters lead us where they lead us.

There is at least one rule, however—that we don’t talk about what’s in the letters until after we’ve each written one. Otherwise, it would be superfluous to write a letter in the first place. And sometimes there are certain things we just don’t talk about at all, but might write about.

That’s one of the great things about letter writing—sometimes you want to share a hard thing that’s on your mind but don’t really need, or want, the other person to respond. You just want them to be present with you, to know what’s on your mind. In conversations it’s hard and sort of awkward to be silent. Letter writing provides the space to foster it.

And it probably goes without saying that we also don’t ever discuss the contents of the notes with other people. We’ve found that we have to be careful not to make it just some cutesy activity that we do. It needs to be a place where we can be vulnerable and share things that are hard to say. It’s no place for curated feelings or thoughts.

And It’s Made a Difference

Writing letters to each other is not a silver-bullet—we still get into arguments and working as a husband-wife team can is sometimes difficult. It does take intentionality to do it well. But writing letters to each other has made a significant impact on our business, and it has been one of the most transformative things we’ve done for our marriage.

*The quote at the beginning of the article is often attributed to George Bernard Shaw, but might have actually been first said by William Whyte. So here I am covering my bases and including both names.

2 thoughts on “Why We Write Letters to Each Other Everyday”

Extended! SAVE 35% with code THANKFUL21 at checkout…