SALE! SAVE 35% at CHECKOUT WITH CODE Thankful21

ACCOUNT LOGIN
View the cart
No products in the cart.
$0.00 Cart

5 Tips for Creating a Block Schedule

And How I Made it Work for Me

How to get more done by creating your own block schedule.

(Note: This post was originally written in 2018. Since then life has changed quite a bit, so it has been updated to reflect those changes. Instead of removing what my schedule used to look like, I’ve tried my best just to add different notes around what has changed. Hopefully you find it helpful… and maybe a little amusing!)

Block scheduling is a method for organizing your work around blocks of time that contain similar tasks. For instance, you might use one block of time for all your meetings and appointments so you only have to leave the office once instead of multiple times, thus eliminating travel time.

And as we looked at our goals at the beginning of the year, we knew that we would have to make better use of our time.

By “we” I really mean me—one of Krista’s strengths is that she has always been able to use her time efficiently.

One of the books I read a few years ago was The Compound Effect, and in it I came across the idea of a “time audit.” Basically keeping a record for a few days of everything you do and how much time it takes. After doing the time audit and realizing how much time I wasn’t using efficiently (which is a nice of way of saying “how much time I was wasting”), I decided to revisit block scheduling.

Since then I’ve also read Cal Newport’s Deep Work, which has challenged me to revisit my schedule in order to make it more productive. Between Davey & Krista and Till Agency, I have to make sure that I am optimizing my schedule.

In the past, I had created block schedules that were too detailed and didn’t provide the flexibility necessary for everyday life.

When I developed my first block schedule, I was able to divide my week into “A weeks” and “B weeks.” Since what I wanted was longer, dedicated times for business projects, I decided that I was going to use every other week to primarily work on “building” projects. The weeks in-between would be devoted to “working” projects.

Building projects included things like launching the Brands that Book podcast; whereas the working projects mostly consisted of client work and tasks that kept our business afloat.

This generally did not mean that I didn’t do any client work during “building weeks.” Rather, I focused on the building project in the morning which is when I’m usually more productive. And I attended to any necessary client work in the afternoon.

We tried to keep “building weeks” free of meetings, but it ended up not being realistic to not have at least one meeting each week. I decided that Thursdays during building weeks would be open for meetings. So if I had to schedule a meeting, at least they would all be taken care of on the same day.

Working weeks were more flexible, and we don’t necessarily use any one day for meetings—but we do always try to stack meetings. However, we’ve found that most meetings happened on Thursday regardless of whether it’s a working or building week. More on why we chose Thursday below.

Something we didn’t do: We didn’t block off times in our calendar and label that time as dedicated to a specific kind of task. This is the kind of thing that I think leads to too much rigidity.

What was great about this framework is that it provided a lot of flexibility.

Honestly it’s taken a lot of time to get back into a routine since Jack was born. Every time I felt like I was in a routine, nap schedules would change thus changing my routine. Additionally, I’ve since cofounded a second business, Till Agency, with two good friends of mine that now requires a lot more attention.

Splitting my weeks into “A Weeks” and “B Weeks” didn’t make much sense anymore. I just have too many meetings and responsibilities between the two businesses that I can’t just check out for a week to focus on “building” tasks. However, building tasks are still important, so I had to figure out a way to make time for different internal projects even if most days included some sort “working” tasks.

There were two adjustments I decided to make: First, I was going to start my day earlier. My current reality is that the best time to get work done is from 5 a.m. to 7:30 a.m. when Jack is still asleep and emails aren’t landing in my inbox. I also tend to be more focused in the morning (more on that below). Second, instead of “A Weeks” and “B Weeks,” I needed to move towards “A Days” and “B Days.”

5 Steps for Creating Your Own Block Schedule

Even through different seasons of life, these 5 steps have helped me create a productive schedule.

1. Determine what kind of flexibility needs to be built into your schedule.

The rigidness of my approach to block scheduling in the past was largely the reason it never worked out.

I spent too much time listening to the “gurus” telling me I had to map out every minute of every day. That sounds like a great idea, but each week looks a little different. I don’t work in a vacuum either—I have to account for other people’s needs in my own schedule.

Block scheduling worked out this time around because I created a loose framework that allowed for some flexibility.

So I encourage you to start with these two questions. (You could also switch out “flexibility” for “grace.”)

What kind of flexibility do you need for your own life?

If you have kids with schedules that change week to week, the flexibility you need is going to look a little different than someone with no kids whose work is largely rote.

Is it realistic to think that you’ll always be able to read between 5:30 and 6:30 in the evening when your kids’ sports schedules might change due to weather? Probably not—but you could decide to read any time you’re waiting for your kids practices to end.

What kind of flexibility do you need for your clients, contractors, and coworkers?

We try our best to only take meetings on Thursdays (and sometimes Fridays). Here’s the thing though: Thursday might not work for one of our clients. We’re not going to turn away that client or refuse to work with her because Thursdays don’t work.

As a side note—we’ve found that lots of other people seem to schedule their meetings for Thursdays, too.

While the rhythm of Krista’s day is similar to mine, our routines do vary. I have to account for that in my schedule. Just because content planning works well for me at a certain time, doesn’t mean it works for her.

2. Make a list of the types of recurring tasks that need to be completed every week, month, and quarter.

Also include stuff like working out and other things that you’d like to include in your weekly schedule.

I recommend writing down everything you do for 1-2 weeks, and approximately how long each task takes you. This kind of time/task audit can help you identify efficiencies and inefficiencies, and it will also help inform your schedule. (Or try using a free time tracker app like Toggl.)

This sounds like a mundane activity, but I’ve found it very insightful!

3. Identify the parts of the day and week that you’re generally most productive and least productive.

I am most productive in the mornings and late afternoons, and I’m least productive right after lunch and towards the end of the week.

As a result, I try to get client work done in the mornings since it requires more mental energy. And I try to schedule my meetings for the end of the week because I’m less likely to be productive in other tasks during that same time.

4. Assign the recurring tasks to the appropriate days of the week grouping similar tasks together.

The magic of block scheduling is eliminating frequent starting and stopping. Grouping similar tasks together and assigning them a specific time will ensure they get done efficiently.

For instance, we try to do most of our social media scheduling on Fridays. This is a task that requires little mental energy, so it goes on a day where we might have little energy left.

On the other hand, I try to focus on content creation towards the beginning of the week and in the mornings because I find it takes more energy.

I recommend keeping things a little bit looser to start. Lots of people recommend opening up you calendar, blocking off times and assigning tasks, but that never worked for me. Try doing this on a separate piece of paper and creating your “ideal” work day. (Note: I’ve had to take this approach since Jack was born and starting a second business. It requires a little more attention to my schedule on a week-to-week basis.)

Then see how it plays out for a week or month or quarter trying to stick to it as much as possible. But remember, the schedule was made for you; you weren’t made for the schedule. Change things up when they’re not working.

5. Reflect on what’s working and what’s not working, iterate, and repeat.

And this is the key for creating a block schedule that’s both efficient and works: Be flexible! It’s okay to change stuff up when it’s not working.

I really want to be the guy who wakes up at 4 a.m., eats nails for breakfast, works out, and has a major task completed by 8.

But that just doesn’t work for me.

Instead, I always try to sleep at least 7 hours, which means I’m usually waking up around 6 or 6:30. And I’ll work out either right when I get up or before lunch. This flexibility works for me. (This has also changed for me: I start my day at 5 a.m. now. And what I mean by “I” is that Krista wakes me up at 5 a.m. to start my day 🙂 With that said, I still think sleep is one of the most important things, so I strive for at least 7 hours a night.)

In the next few weeks, we’ll be welcoming our first child into the world. Needless to say, life’s gonna change. My current schedule will need to evolve as our family grows, and I’ll definitely have to revisit the flexibility question above. (Turns out that was an understatement)

Lack of direction—not time—is the problem

The sales legend Zig Zilgar once said, “Lack of direction, not lack of time, is the problem. We all have 24 hour days.”

Block scheduling can provide a flexible framework for making the most out of your time. The people who seem to get more done in less time are those who intentionally use their time.

Creating a block schedule of your own can help ensure that you’re using your time efficiently and limiting wasted time. 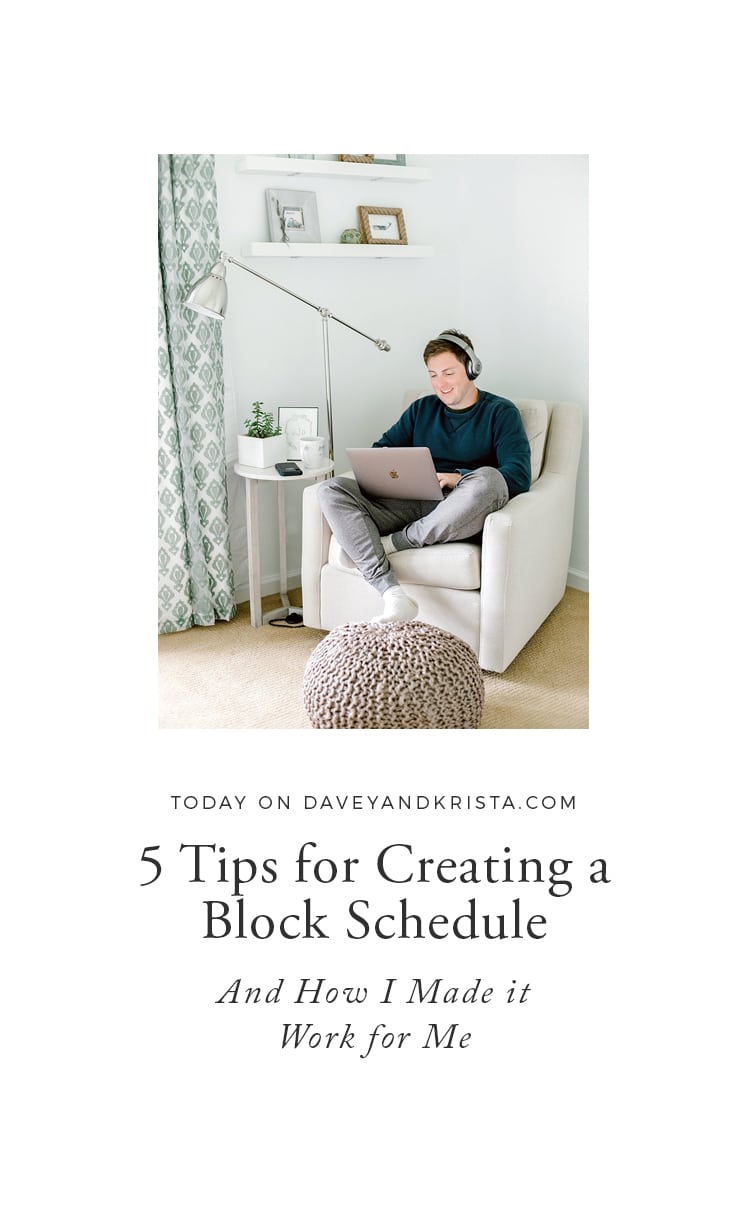 Extended! SAVE 35% with code THANKFUL21 at checkout…